Uisge beatha | The Water of Life | Scotch Whisky... Whatever you call Scotland’s national drink, and whichever Scotch you discover, you know that it is a product of quality, crafted in Scotland, with a unique heritage stretching back more than 500 years.
Tagged with:

The story of Scotch begins as early as the 15th century. The earliest documented record of distilling in Scotland occurred in 1494 in the tax records of the day, the Exchequer Rolls.

Friar John was in luck – this was enough malted barley to produce almost 1,500 bottles of a potent spirit which would be refined and improved in the years ahead.

Illicit stills and running from the tax man

The increasing popularity of Scotch attracted the attention of the Scottish Parliament, looking to profit from the fledgling industry. The first taxes on Scotch were introduced in 1644 which led to an increase in illicit whisky distilling across Scotland.

Smuggling became standard practice for the next 150 years. The excisemen, or gaugers, as they were known, and the illicit distillers began a game of cat and mouse, with canny Scots coming up with increasingly ingenious ways of shielding the spirit from taxation.  Even usually honest members of the clergy would hide Scotch under the pulpit, and the illicit spirit was even transported by coffin to avoid the taxman!

By the 1820s, as many as 14,000 illicit stills were being confiscated every year, and more than half the whisky consumed in Scotland was being enjoyed without the taxman taking his cut.

One of the most well-known tax collectors of the 18th century was Robert Burns - Scotland's bard.  He trained as an exciseman before turning his attention to writing some of Scotland's most loved poetry.  In 1785, Burns wrote "Scotch Drink" - an ode to whisky and the nature of happiness - of community, cooperation, warmth and a friendly welcome - and his points went to the true spirit of Scotch.

Moving towards a modern industry

The continued flouting of the law eventually prompted the Duke of Gordon, on whose extensive lands some of the finest illicit whisky in Scotland was being produced, to propose in the House of Lords that the Government should make it profitable to produce whisky legally.

In 1823 the Excise Act was passed, which sanctioned the distilling of whisky in return for a licence fee of £10, and a set payment per gallon of proof spirit.

Smuggling died out almost completely over the next decade and, in fact, a great many of the present day distilleries stand on sites used by the smugglers over two centuries ago.

The rise of grain whisky

Until now, the spirit – illicit or otherwise – had been Malt Whisky. But, in 1831, Aeneas Coffey invented the Patent Still which enabled a continuous process of distillation to take place.

This led to the production of Grain Whisky, a different, less intense spirit than Malt Whisky. The lighter flavoured Grain Whisky, when blended with the more potent and fiery malts, extended the appeal of Scotch Whisky to a considerably wider market.

Scotch moves out into the world

During the 19th century, titans of the whisky world like James Buchanan, Tommy Dewar, Johnnie Walker & James Chivas took Scotch out of Scotland for the first time.

Using their entrepreneurial spirit, they took whisky out to the British empire and far beyond, creating an enduring love of Scotch from Hong Kong to Hanoi, Sydney to San Francisco, Montreal to Mumbai, Bogota to Berlin, Cape Town to the Cape Verde islands. The export markets they built are the foundation stone of Scotch whisky’s success today.

A spot of luck also helped global expansion. In the 1880s, the phylloxera beetle devastated French vineyards, and within a few years, wine and brandy had virtually disappeared from cellars everywhere.

Once again canny Scots were quick to take advantage. By the time the French industry recovered, Scotch Whisky had replaced brandy as the preferred spirit of choice.

Find out more about the role of the SWA here.

In 1920, prohibition was introduced in the United States.  Whisky was exempt, as long as it was prescribed by a doctor for medicinal purposes.  Some famous faces used this to their advantage... 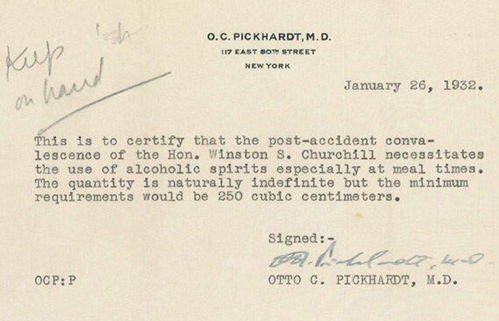 Annual export targets were agreed with the government and Scotch’s journey to become the world’s premier whisky continued.

Five centuries after it all started, 1994 the Scotch Whisky industry celebrated the 500th anniversary of whisky production in Scotland – and did it in style! For the first time, global exports of Scotch Whisky broke through the £2 billion mark.

Scotch Whisky must, by law, be distilled and matured in Scotland in oak casks for at least three years and bottled at a minimum alcoholic strength of 40% abv. The robust legal protection of Scotch – vital to safeguard a spirit globally renowned for its quality – has grown over time.

The first definition of Scotch in UK law was secured by 1933, with a dedicated Scotch Whisky Act in 1988 and new Scotch Whisky Regulations in 2009. These comprehensive rules govern the Scotch Whisky industry – you can find out more here.

Whisky for the World

Today Scotch Whisky is enjoyed in 175 countries throughout the world. Each second, 42 bottles of Scotch are shipped from Scotland across the globe, helping to support tens of thousands of jobs in Scotland and ensuring that millions of consumers can enjoy a dram.

A global industry, 500 years in the making.