A collaboration between two of Scotland’s oldest arts – poetry and whisky making – has resulted in the launch of a commemorative charity bottling of Scotch Whisky, complete with a specially-written poem, for International Women’s Day.

Following a tender process arranged by the Scotch Whisky Association, Isle of Raasay Distillery in the Inner Hebrides was selected by the Makar to create and bottle the commemorative single malt. The distillery worked closely with the Makar to choose a special single cask bottling, and a poem written by Jackie Kay and titled ‘Here’s Tae Ye!’ will feature on the bottle’s label. For every bottle sold, 10% will be donated to Glasgow’s Women’s Library, a charity chosen by Jackie Kay, which as well as being a lending library, is an archive about women’s lives dating back to the 1930s.

The Makar’s Malt has been released in what is hoped will be the start of a new tradition for future Scots Makars. Jackie Kay is the third Makar to have been appointed by the Scottish Government in 2016, her tenure ending in March 2021.

Jackie Kay, Scots Makar, said: “I am so delighted to raise a glass of my very own malt to all the women that have made my life possible on March the 8th, International Women’s Day. It is a dream dram come true for me, making some kind of alchemy. Poetry and whisky.”

Karen Betts, Chief Executive of the SWA said: “We’ve been delighted to work with Jackie on the Makar’s Malt, which is a fabulous celebration of poetry and whisky – both of which are central to Scotland’s identity, and to its past, present and future.

“In what has been a difficult twelve months for so many people, as well as for distillers, this is good news to enjoy.  I hope it will inspire people to visit our Hebridean distilleries, of which the Isle of Raasay distillery is one, when they are able to once the pandemic has eased.  They will not be disappointed – by the whisky, poetry nor the views!

“It’s also a pleasure to see this first Makar’s Malt released on International Women’s Day - a day on which we are celebrating the progress our industry is making to promote equality, diversity and inclusion, and to remind people everywhere that whisky is for everyone, whether you want to come and work with us or to simply enjoy a dram.”

Alasdair Day, co-founder of Isle of Raasay Distillery said: “It is particularly poignant that we are celebrating Jackie Kay’s outstanding tenure as Scots Makar on International Women’s Day with a single cask bottling from the Isle of Raasay, birthplace of the late Gaelic poet, Sorley MacLean.

“The Isle of Raasay Distillery are very proud to be the first distillery chosen to work with The Scots Makar on this historic single cask release - a fruity, lightly peated dram that has been matured in one of our signature first fill Bordeaux red wine casks.” 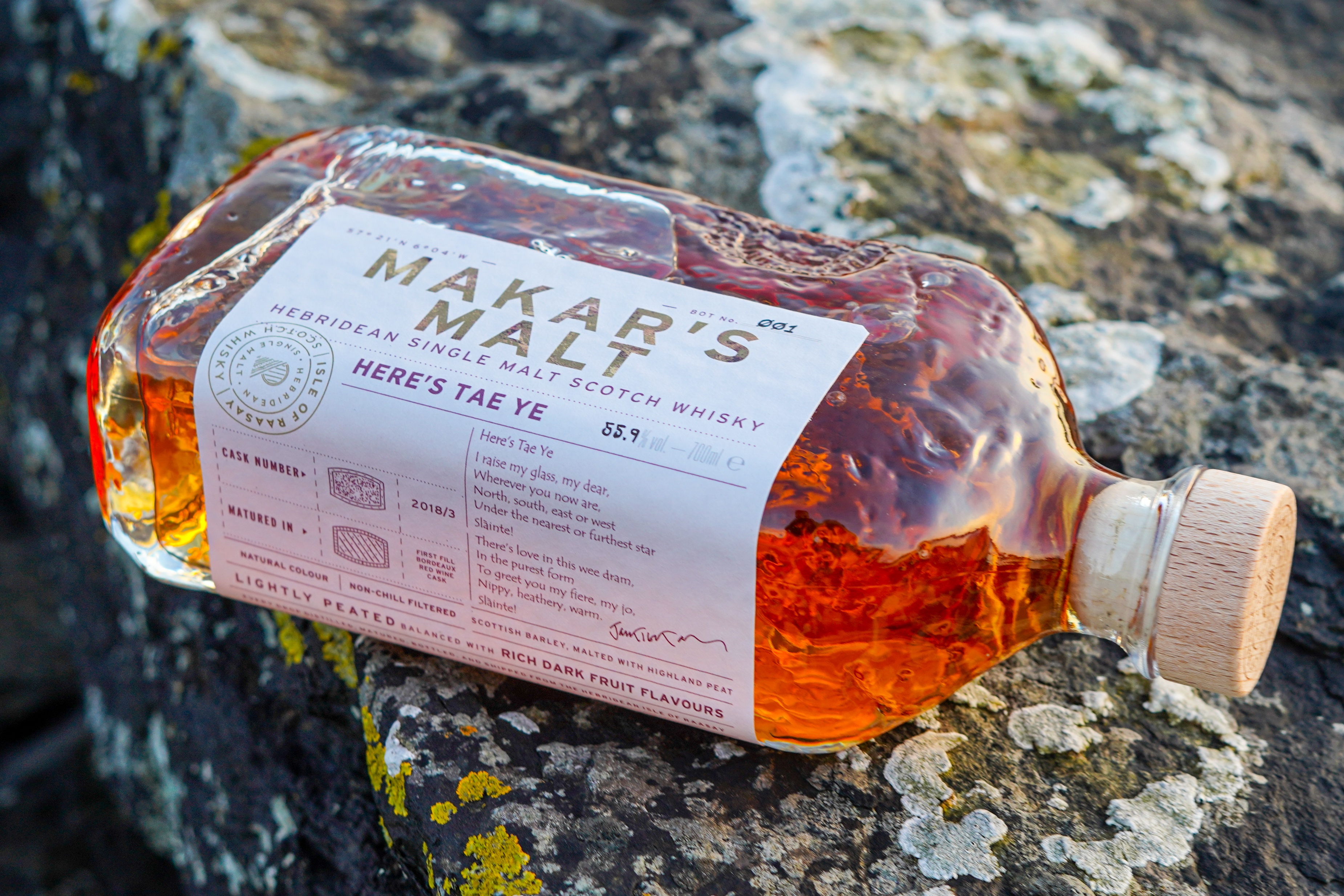 About the Makar’s Malt

Jackie Kay was born and brought up in Scotland.  She is the author of—among other books—The Adoption Papers, which won the Forward Prize, Red Dust Road, winner of the Scottish Book of the Year Award, Trumpet, and the Costa-shortlisted Fiere. She is Chancellor of the University of Salford and Professor of Creative Writing at Newcastle University. She has served as Scots Makar, the National Poet for Scotland, since March 2016. Her term will end in March 2021.

About Isle of Raasay Distillery

The independently owned Isle of Raasay Distillery (opened in 2017) produces island single malt Scotch whisky and gin in the Inner Hebrides. This unique whisky destination is the only distillery in Scotland with luxury accommodation in the same building as a working distillery as well as a five-star visitor centre and some of the best views in Scotland.

The Hebridean Isle of Raasay is separated from the neighbouring Isle of Skye by a scenic 25 minute ferry journey. This corner of the world is known for its breathtaking natural beauty, geological variety, one of Scotland’s most incredibly diverse ecosystems, and provides the ingredients for the perfect dram. www.raasaydistillery.com

I raise my glass, my dear,
Wherever you now are,
North, south, east or west
Under the nearest or furthest star
Slàinte!

There’s love in this wee dram,
In the purest form
To greet you my fiere, my jo,
Nippy, heathery, warm.
Slàinte!